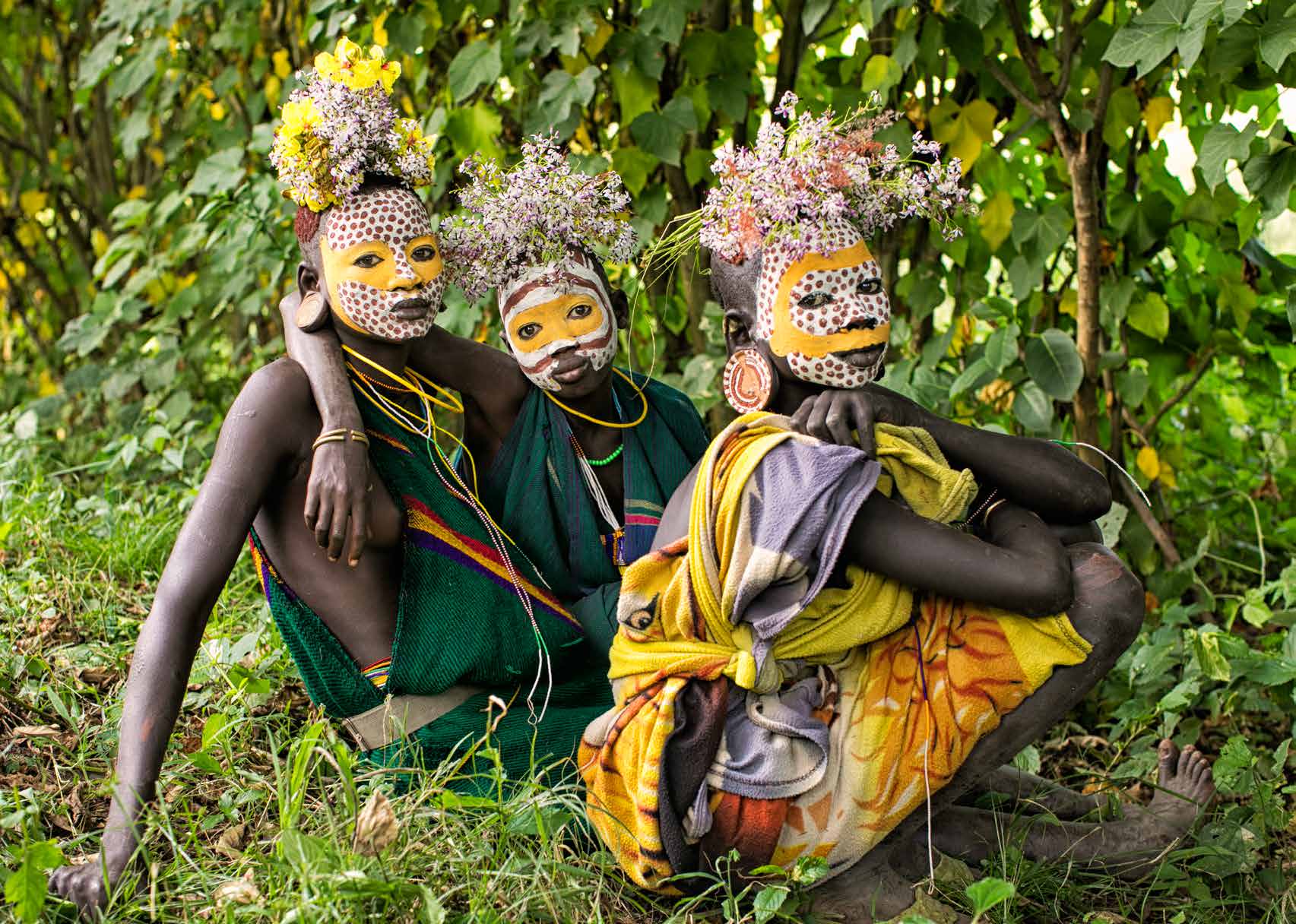 Given the chance to travel, photographer Nadine Saacks ventures to some of the most unexplored, inaccessible parts of the world to photograph people and places that few of us would ever get to see. In July 2018, Nadine visited Ethiopia for a month to photograph the vanishing Surma tribe. We spoke to Nadine about the experience and her photography. 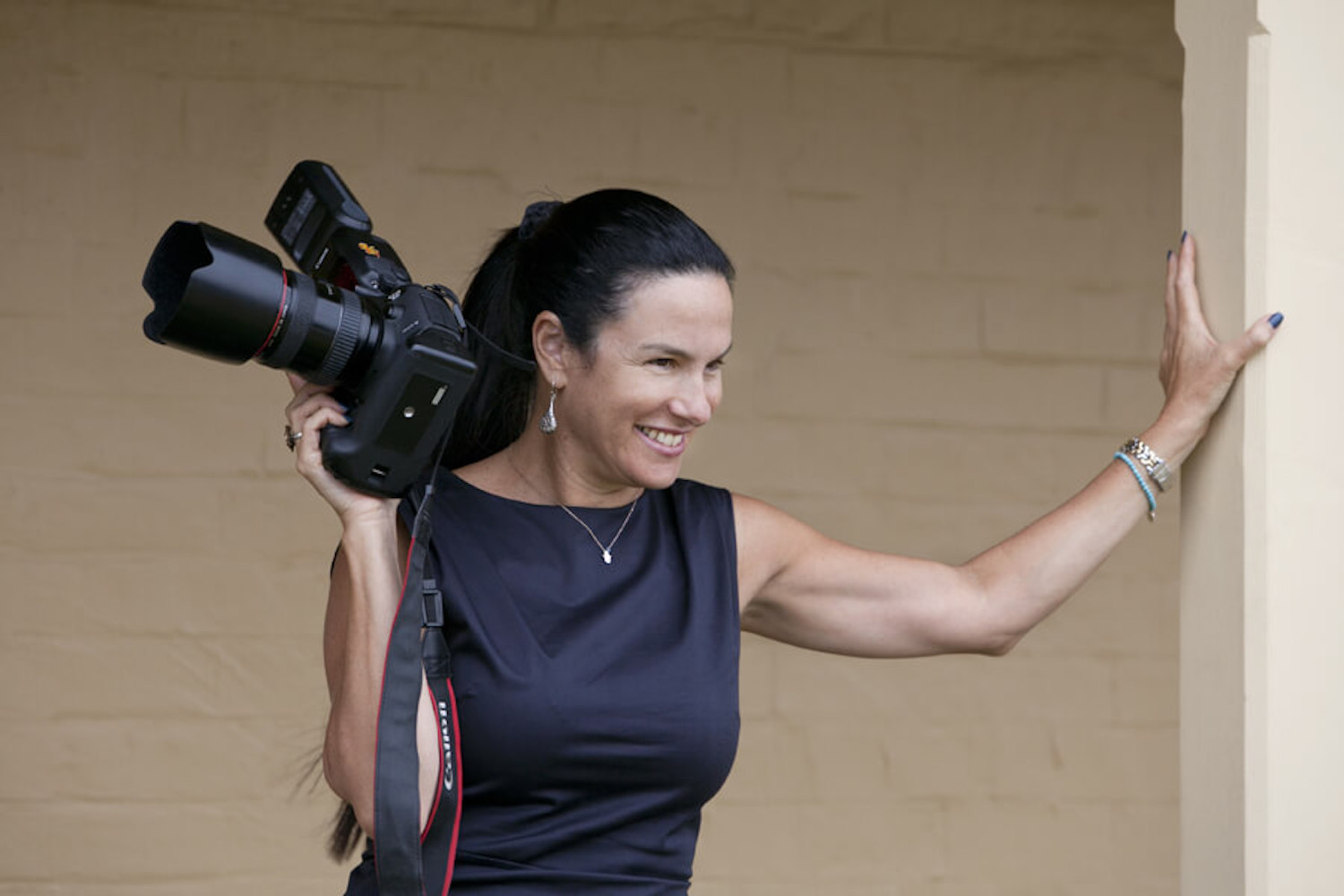 Have you done these types of photography trips before?
Yes, I love trying to find unusual spots and to tell different stories. I’ve been to Cuba, Myanmar and I've travelled India extensively. I did an amazing trip to Cambodia where I photographed children in an orphanage during the day – they never had pictures taken before – and in the evenings I would photograph the Khmer lady-boys. I’m going next month to Rishikesh and Dharamshala to photograph the amazing characters and colours of beautiful India, one of my favourite destination.

What attracted you to visit Ethiopia?
I wanted to photograph lost tribes because there are not many places where these are left in the world. There’s the Amazon and Papua New Guinea, and in the Omo River valley in Ethiopia and South Sudan. 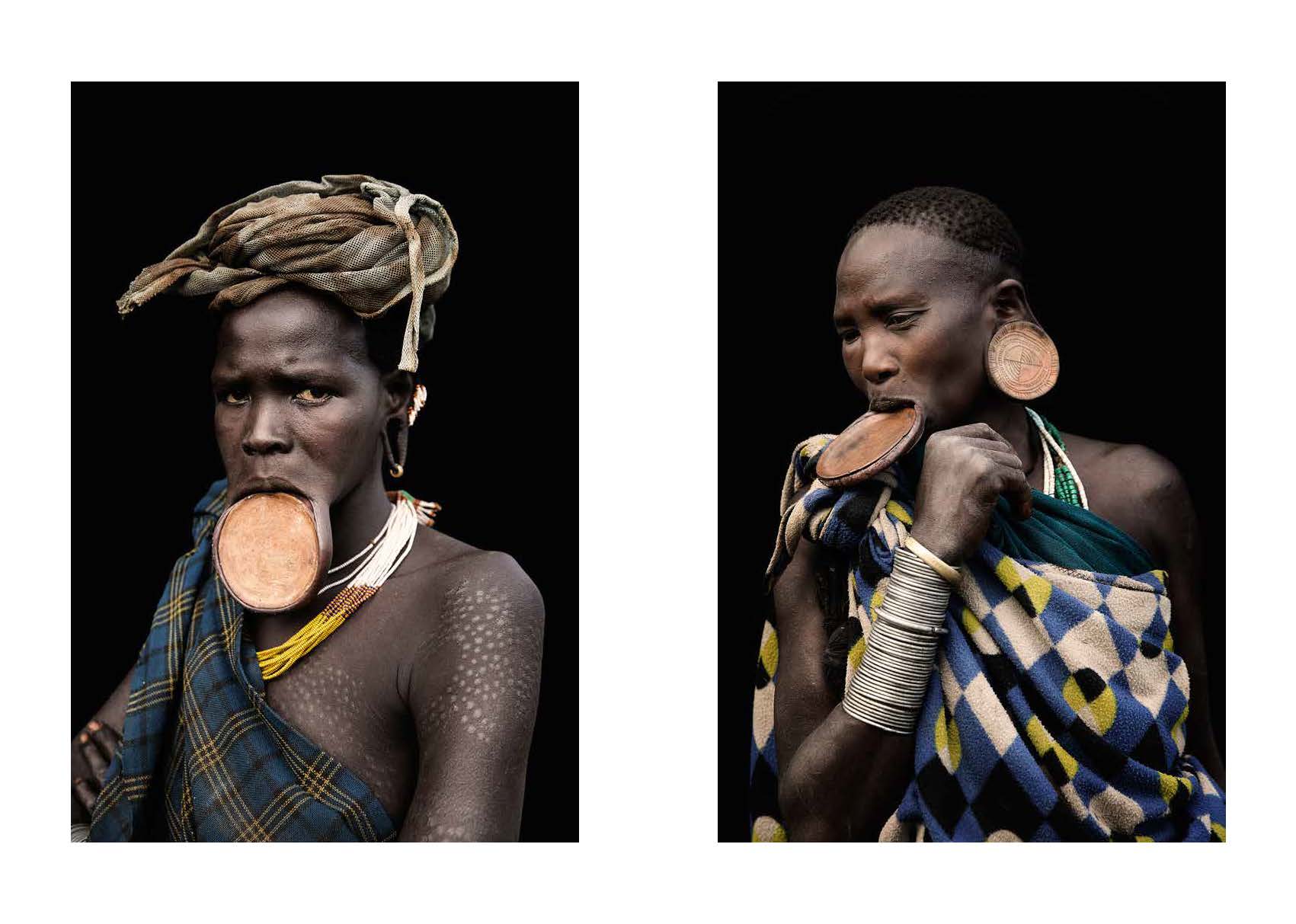 Can you tell me about your trip?
I first went to the north to the Jewish area to see the Falasha villages, and to Lalibela, which is the eighth wonder of the world. From there I went back to Addis Ababa, where my son joined me and we travelled to the Omo valley. Just getting there, which took days, was an experience in itself. We took two four-wheel drives, two drivers and two guides. We needed to take petrol, extra tyres, food, water and camping gear. There are no real roads. Sometimes you’ll see a tree knocked down and have to cut it to drive through. We would travel for hours to find a camping spot, which is just a green area, where we would set up a small tent. 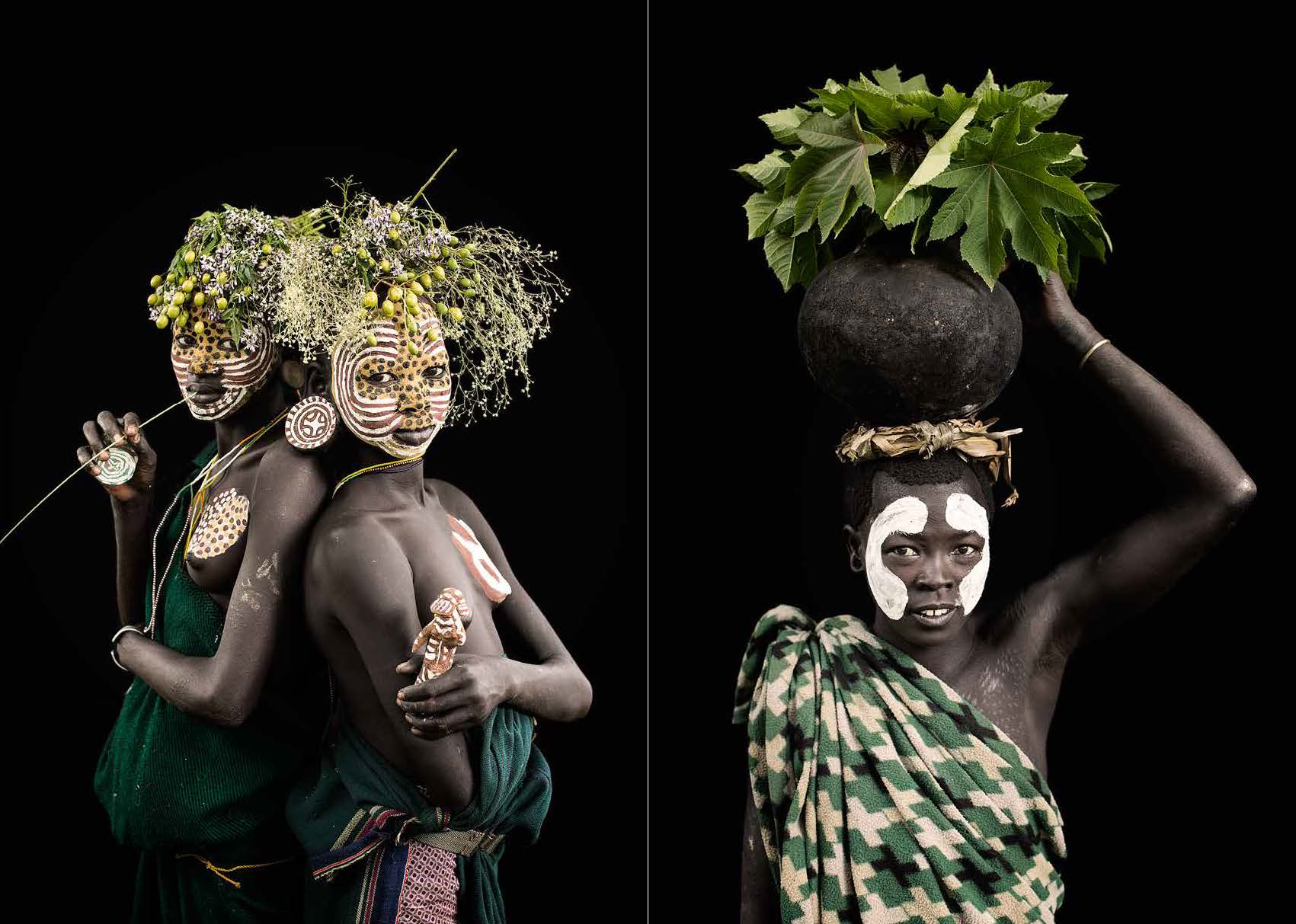 Can you tell me about the Surma tribe and your experience with the people?
For the first few days I didn’t take out a camera as I wanted to let them discover me before I started learning about them. The people were fascinated with me. They thought I was just the strangest thing.

The women and men live separate lives. The men are nomadic and look after the cattle. The women look after the children. They trade cattle, like money. The more cattle a man has, the more wives he can have, because he buys his wives with cattle.

We saw what’s called the Donga, which takes place before harvest time. The different sects of the tribes – about 500 men – get together and have a stick fight for cattle and to impress the woman. That was an experience. It was unbelievable. The most surreal thing I have ever seen. 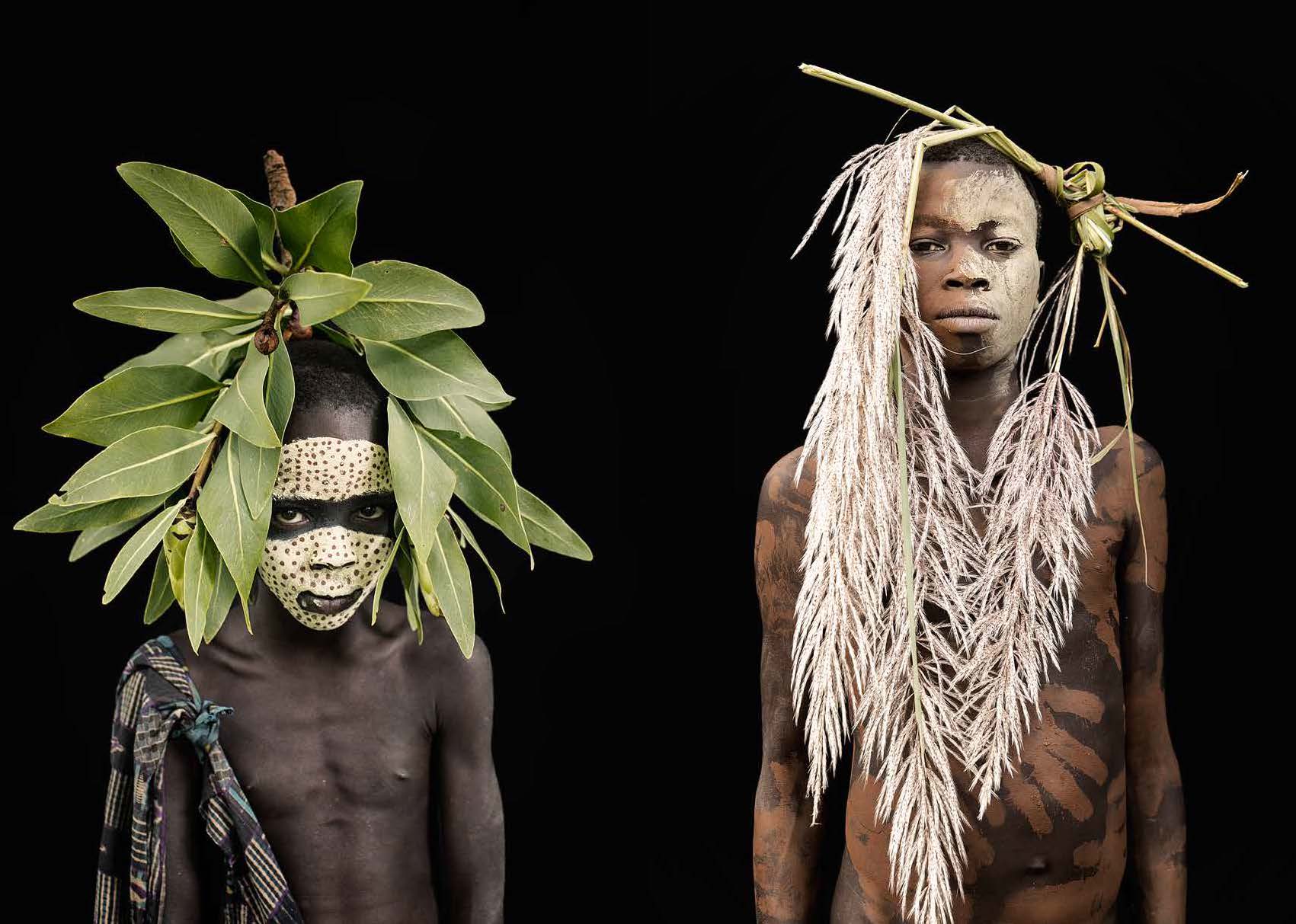 How did you approach photographing them?
Because I wasn’t rushed, I could spend time with them. I could really get to know the people and try to bring out the best of them. I like to capture what I see without changing anything. I did take a black background with me to create more interesting images, the Surma woman and children would come and talk to me and I would take their photographs which they loved seeing at the back of my camera screen.

What did you want to capture in your photographs?
I wanted to show their innocence, to tell their story and to show the beauty of how they live together. The women look after each other – they cook together and all care for the children. They just have one blanket they use as a skirt and bedding. There are no schools, no shoes, no pens and papers.

The people paint their faces and bodies with clay as it protects them from the sun and mosquitoes as malaria is rife. Also because of superstition – they say you should paint your face every day to protect them. They start painting their faces from an early age. The young women wear lip plates and ear plates. The reason is that the Spanish used to steal the women during slavery days. So the women would deform their faces to be less attractive so they wouldn’t be taken as slaves. But today it’s considered beautiful and the bigger the plate, the more cattle the family are paid when they marry off their daughter. 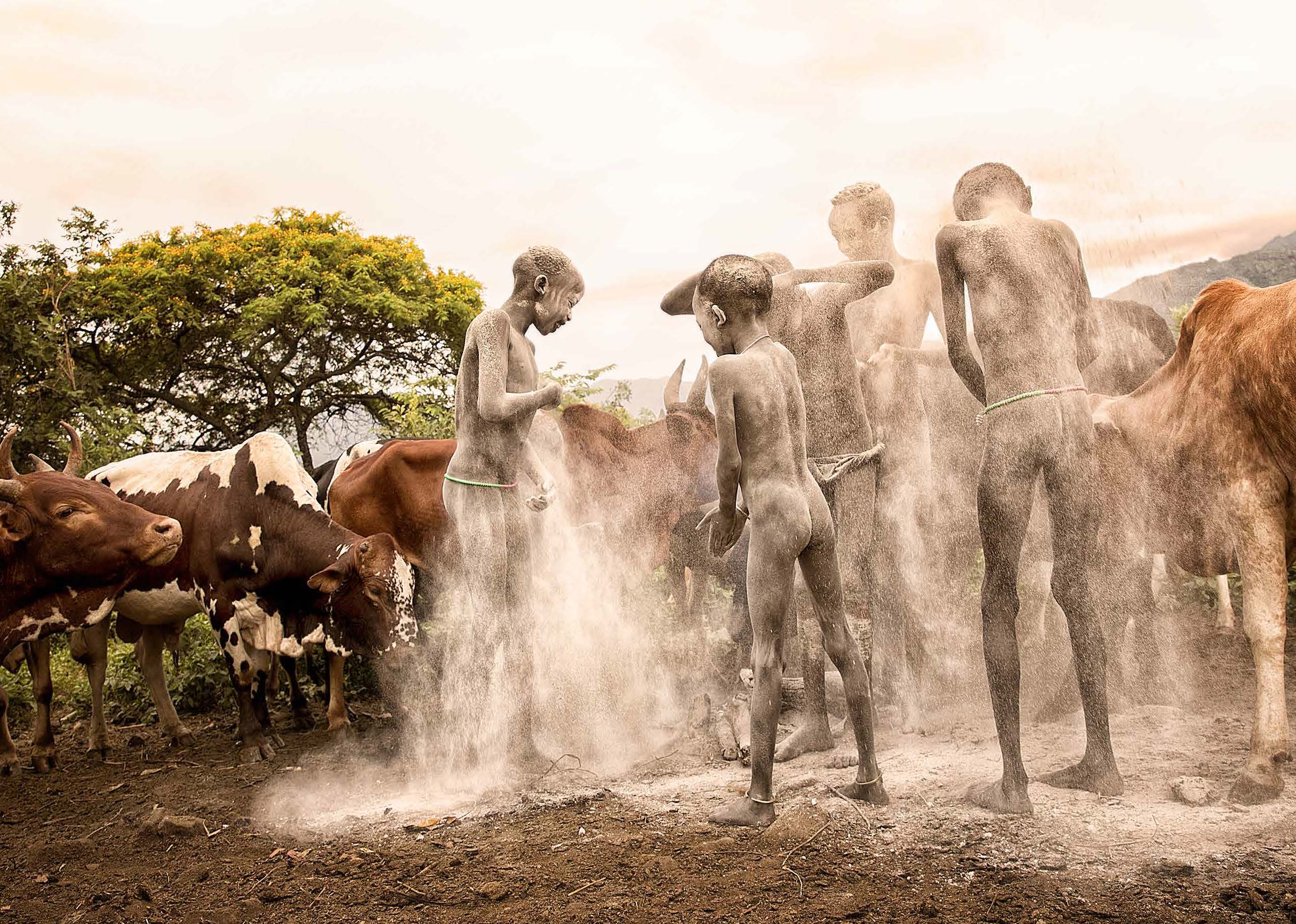 What are you most proud of about your photographs?
That I captured the soul, the essence of them. How proud they are and their beauty.

Nadine’s photographs have become treasured additions in interiors throughout Australia. She will be exhibiting Vanishing Surma Tribe in The Hamptons in New York in August, and in Sydney by the end of the year. For more information, contact Nadine at photography@nadinesaacks.com or visit her instagram: @nadinesaackstravel. 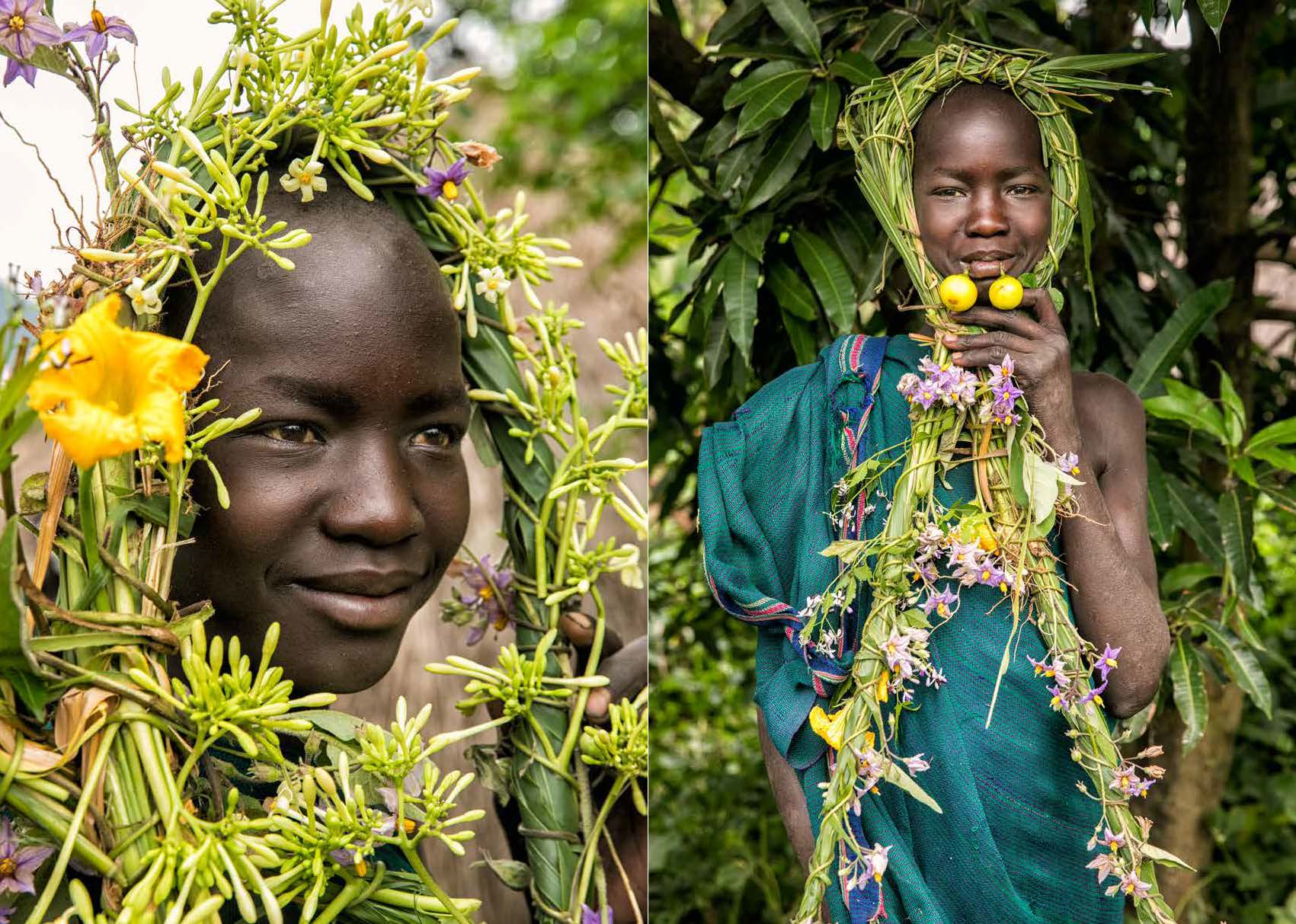 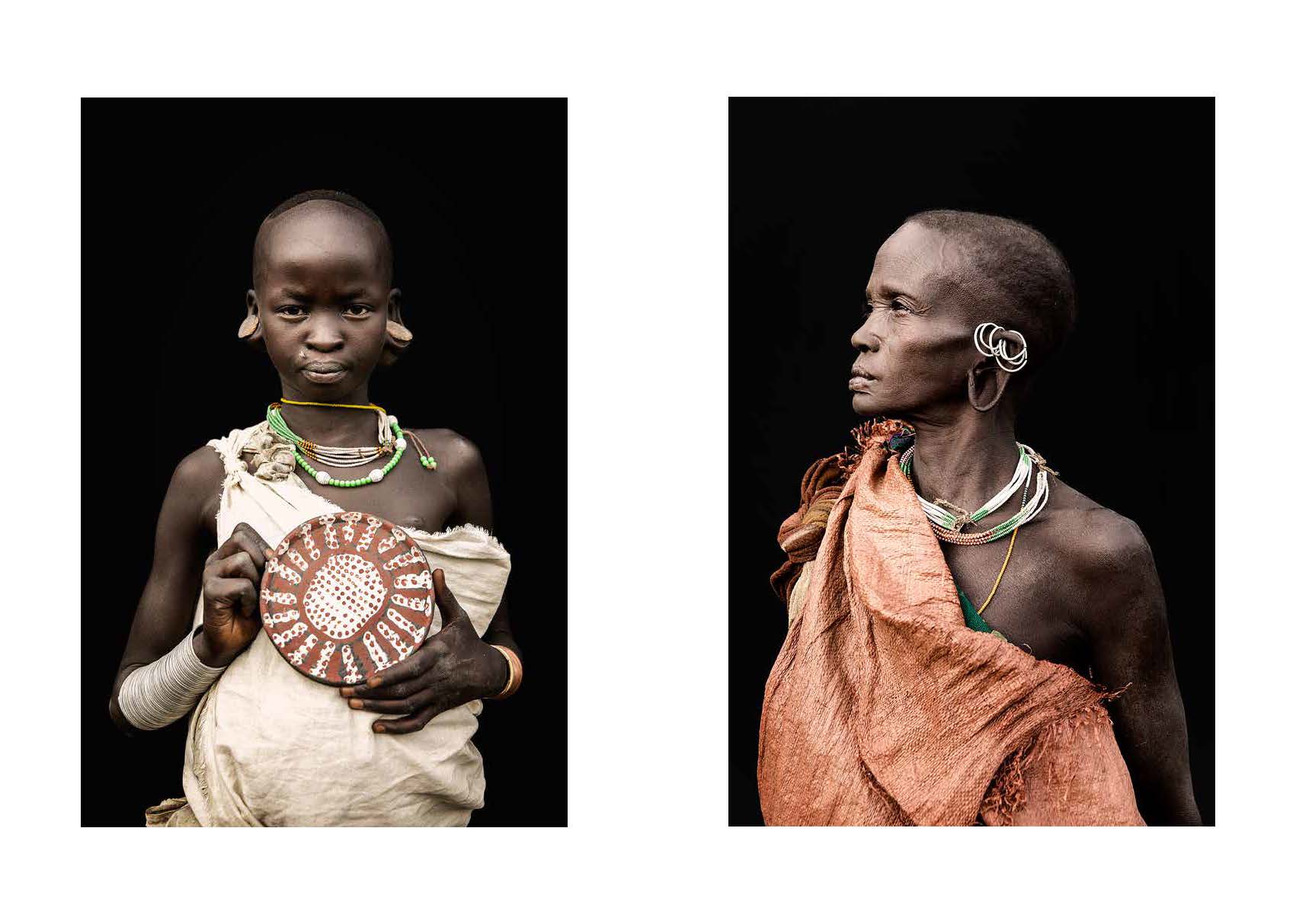 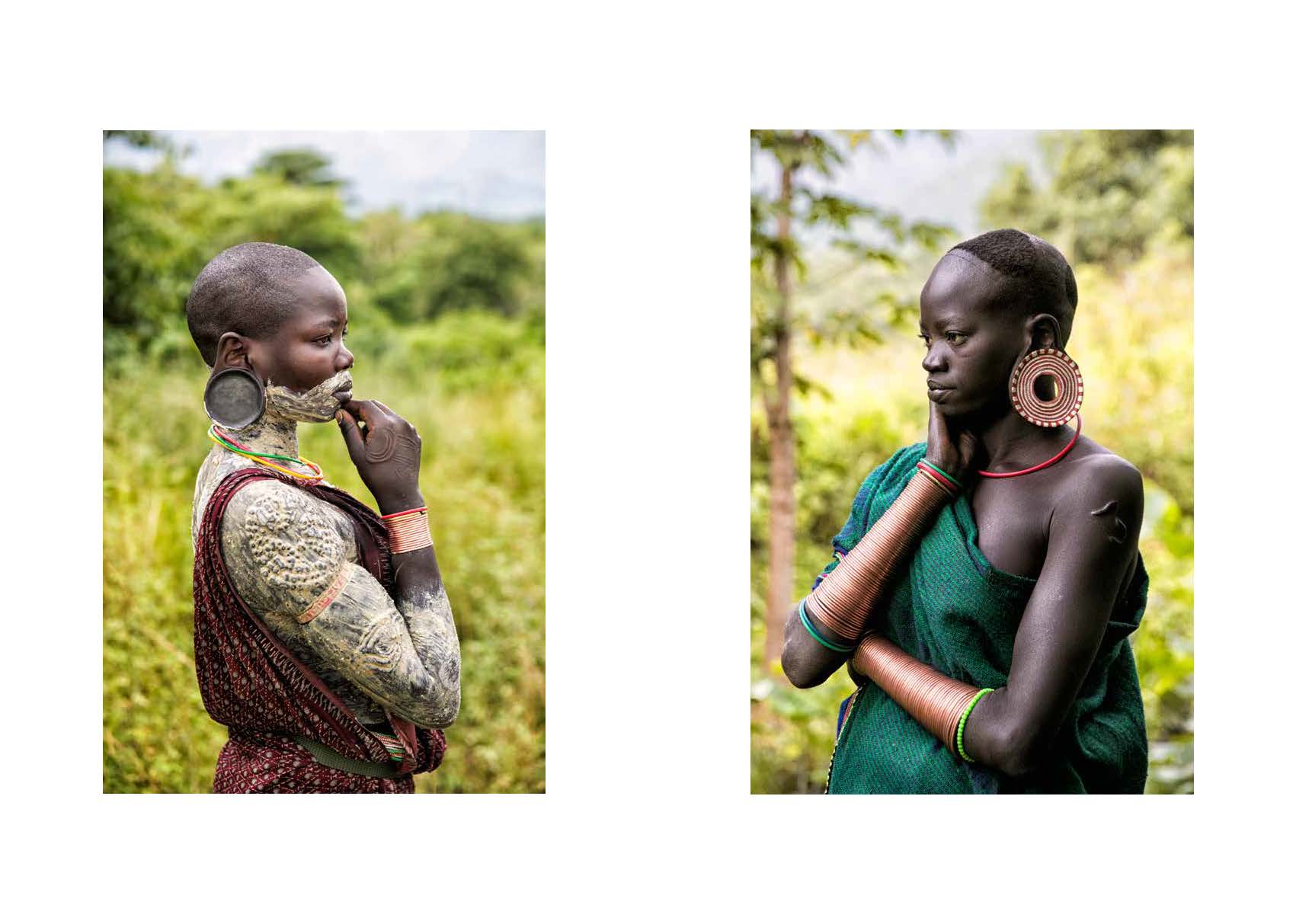 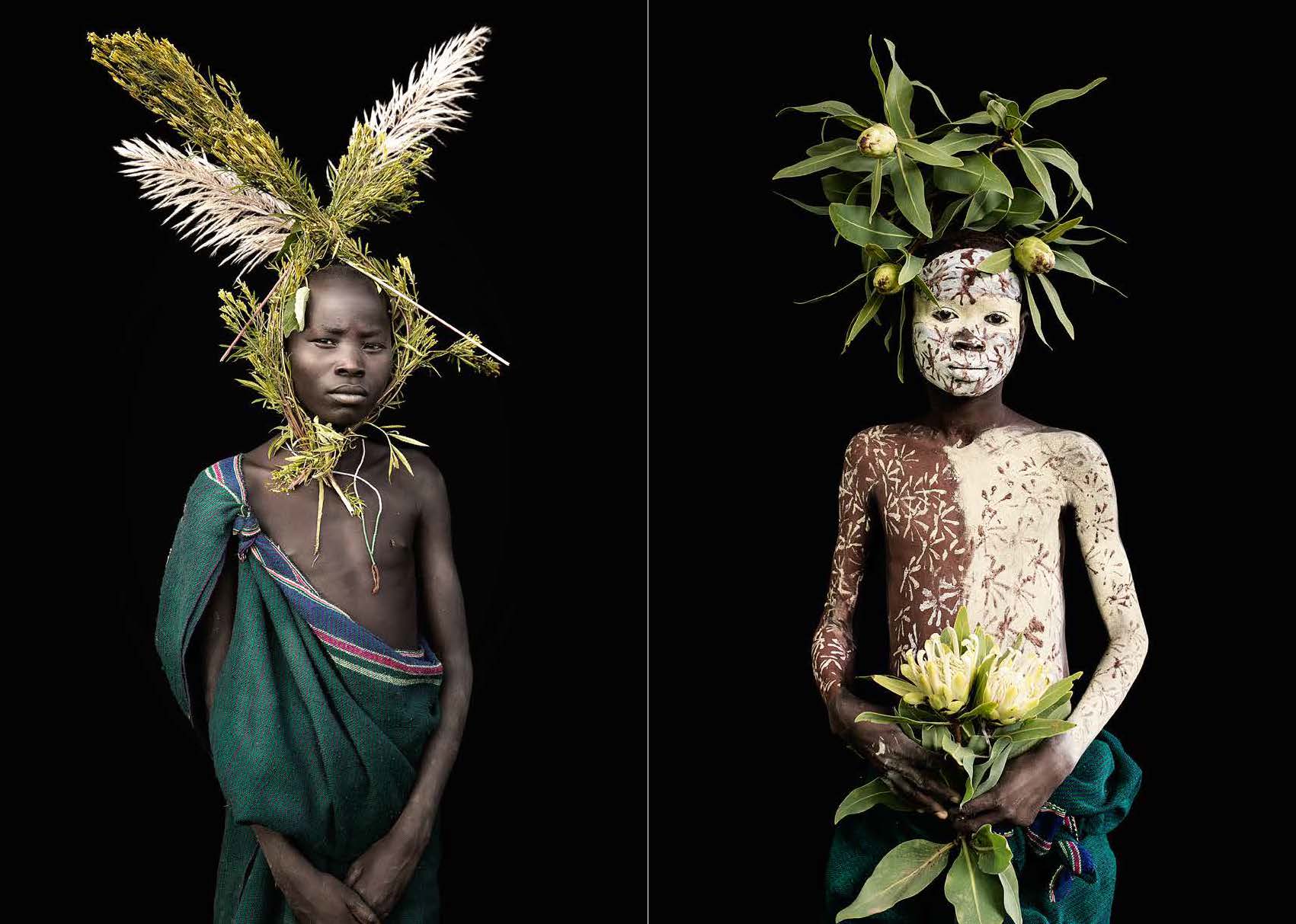 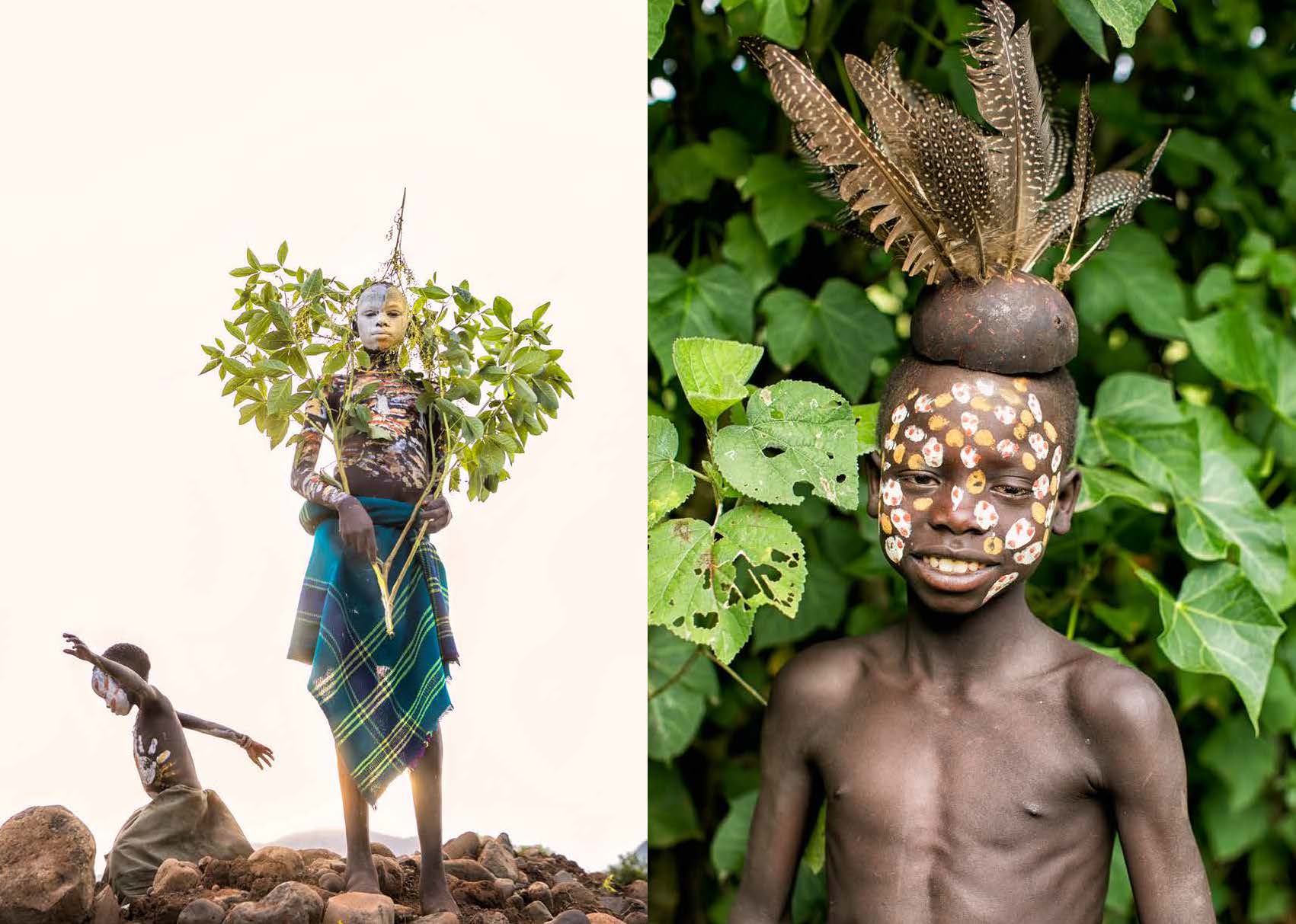 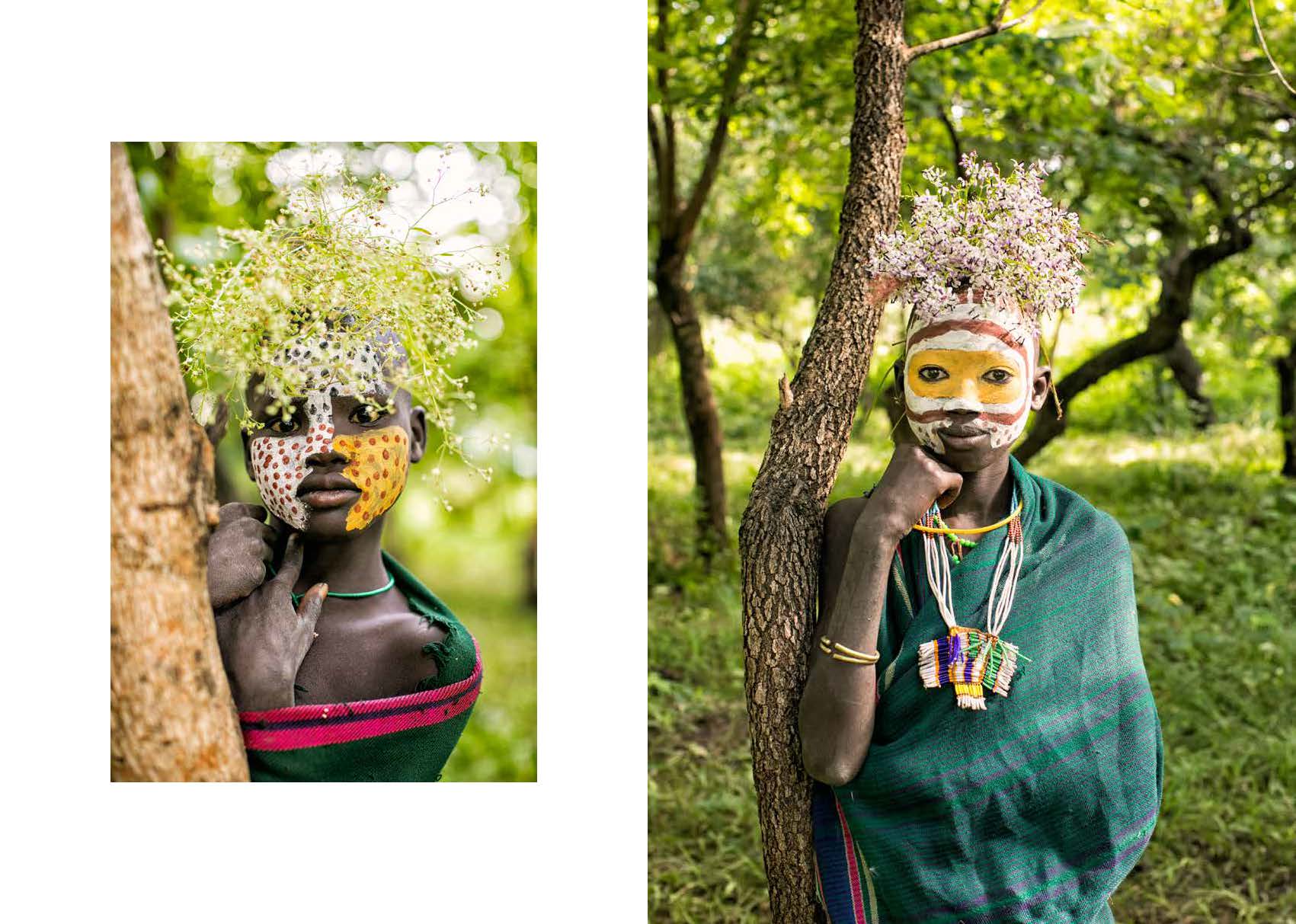