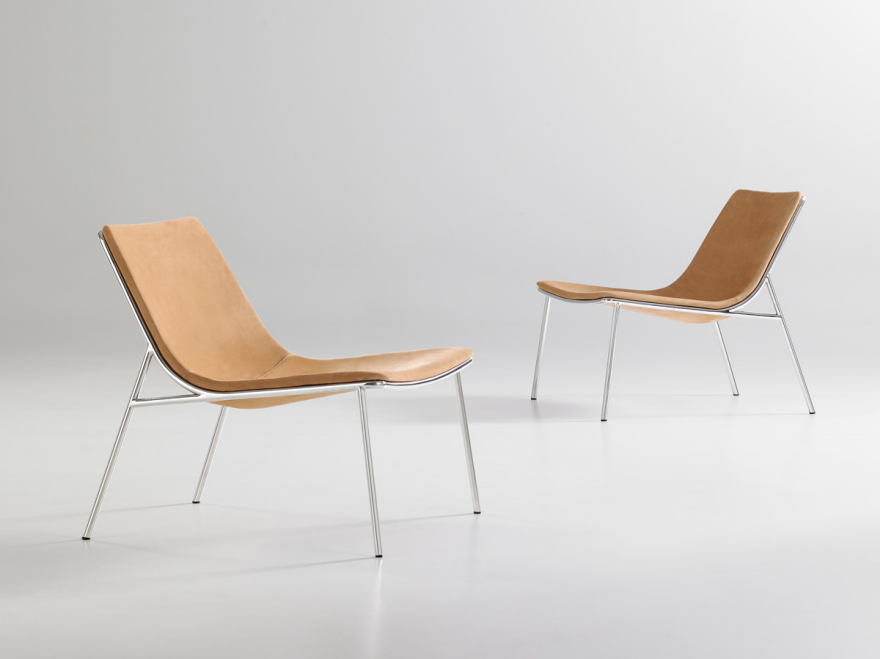 Does a comfy chair need to be bulky? Based on many of the offerings on the market, you might conclude as much. But Brandon Kim's new Lilt chair for Bernhardt Design proves otherwise—it is a sleek lounger with a wide seat that seems to balance precariously upon a stainless steel frame running along its edges, without any crossbar supports.

Now based in Manhattan, Kim began working on concepts for Lilt in October 2012, when he was still a student at the Art Center College of Design in Pasadena. (He graduated in 2013.) Bernhardt had approached Kim with a brief for a lounge seat. "From the beginning, there was a goal to create a chair that has a simple and streamlined aesthetic," Kim says. "But, more importantly, the chair had to also be as lightweight as possible. The chair's weight should be proportional to its clean aesthetic." Kim knew that with a stainless steel frame, he had to be prudent with the amount of material used: "In order to limit and reduce the weight as much as possible, an efficient way of supporting the chair was needed instead of adding chunks of metal. 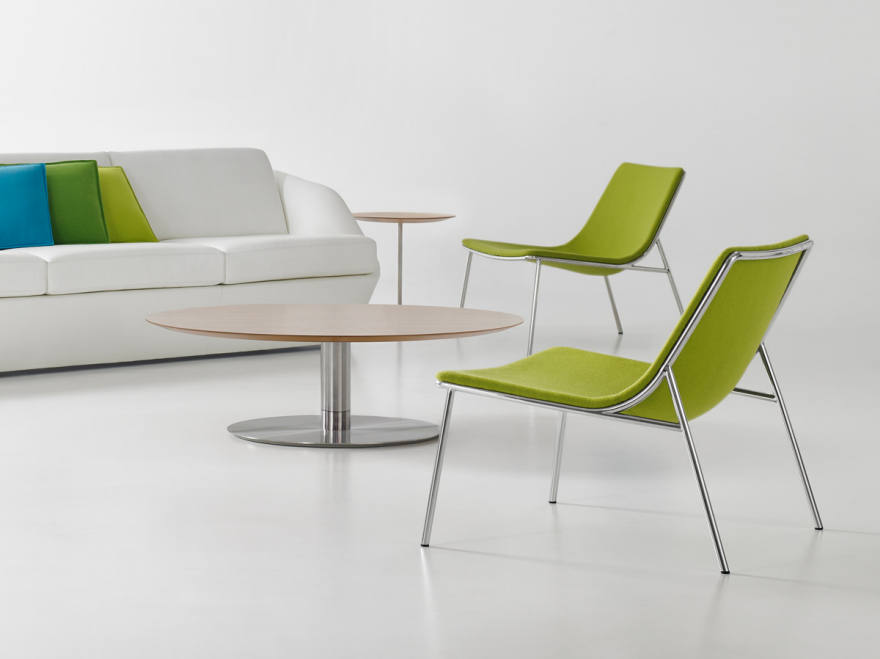 That challenge led the designer to innovate on the structure of the chair itself, re-envisioning how the frame could offer more support with less material. Kim recalled climbing the trees in his backyard and sitting in their branches as a child. Sparked by that memory, the concept for Lilt became centred around the idea of sitting on a tree branch—inspiring a triangular structure in the back legs of the chair.

"The triangular frame structure resembles branches and physically renders a scene of users sitting on a tree," Kim says. Not only did the frame provide an interesting aesthetic detail, it also offered the structural support Lilt needed. The three-way joinery on each side provides extra durability and strength, allowing Kim to forgo any crossbar support in the seat's shell or back. Looking back on the initial concept, Kim admits that it was a bit of a gamble. "I knew it could support a lot due to the x-y-z, three-way joinery," Kim says. "There was no way it was going to wobble, but I was prepared to have to add a crossbar. None of us knew if it would be enough, but after the official stress test, it was surprisingly sturdy." Lilt weighs a little more than 40 pounds and can easily hold more than eight times its weight.

Right out of school and working with a tight budget, Kim made prototypes sparingly and inexpensively—starting with paper and cardboard scale models while making iterations to his design in CAD. "As a young designer who just got out of a college, the cost for building prototypes isn't easy," Kim says. "Therefore, I tried to be as close as possible to what I wanted to design with the prototypes at the early stage." Kim modeled Lilt in CAD, testing elements like proportions and pitch angles by comparing his chair to others on the market. To do this, Kim downloaded several 3D models of his competitors' chairs and then compared them virtually to Lilt by setting them up side-by-side in render environments. He would then go to furniture stores, sit in the chairs and carefully examine these details in person, making adjustments to his own seat's back in the computer model. "By doing this, I was able to closely predict how my chair would actually feel," he says. "I repeated this step many times until I felt enough and right." When it came time to make a full-scale, functioning prototype, Kim was satisfied with the result. "My prediction happened to be 99% correct," he says. 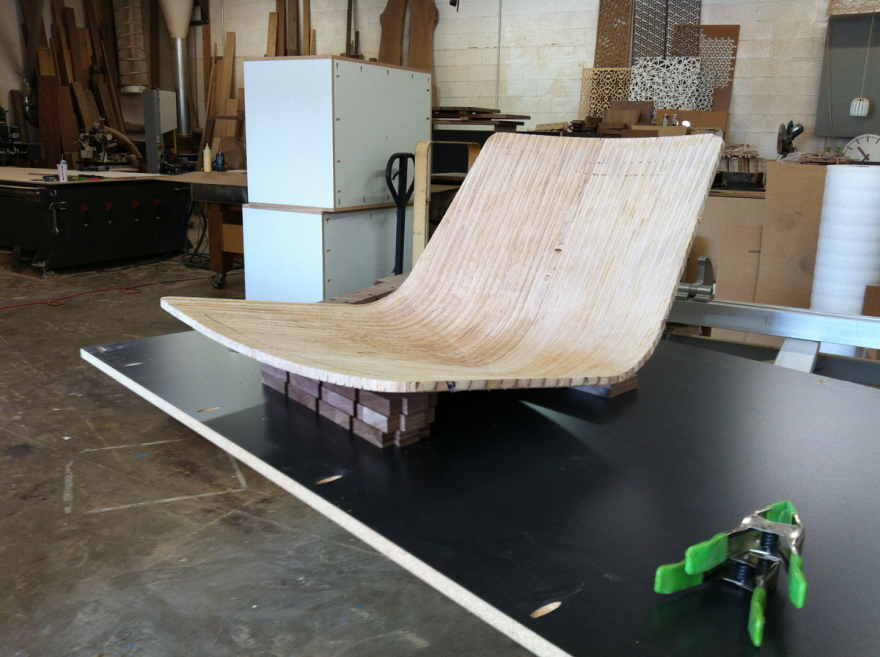 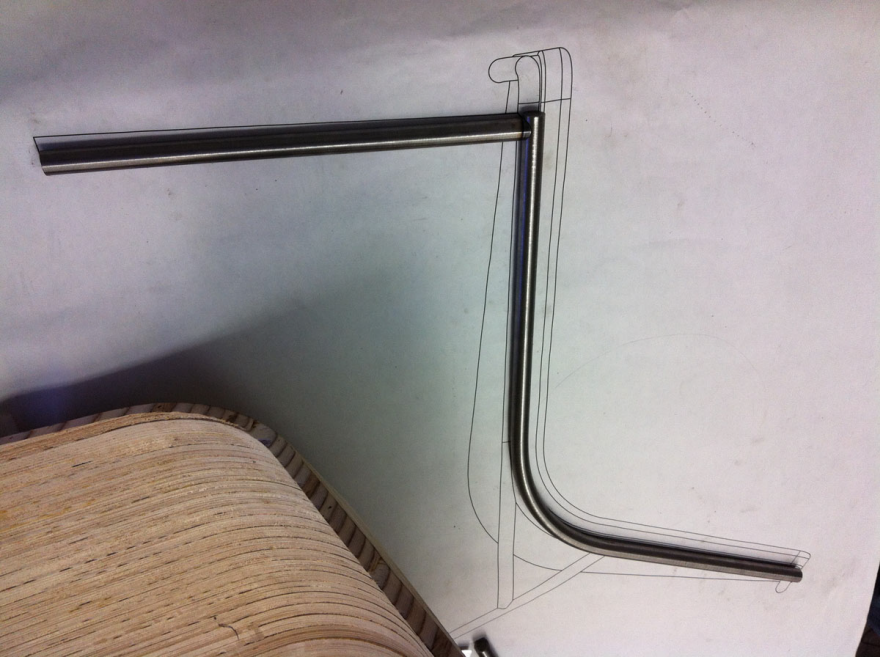 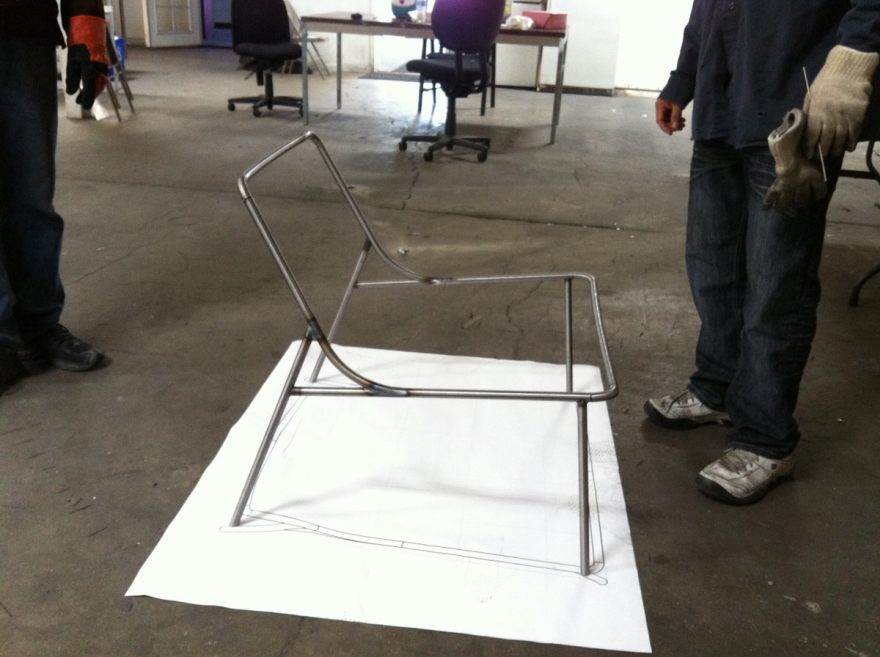 Another feature Kim looked at when making these trips to furniture stores was the comfort of the different seats. With no crossbar support, Lilt would need a rigid seat shell—but as a lounge chair, it also needed to be quite comfortable. Kim opted for a quarter-inch-thick thermoformed plastic shell, with a three-quarter-inch foam lining on top. "The seat itself does not contain too much of cushion since the foam is only three-fourths of an inch," Kim says. "However, in my opinion, comfort is not something that can be determined by the thickness of the seat. Of course, a thick soft foam is a very decisive factor, but I believe a harmony between the particular seat height and the precisely right back-pitch angle is the most significant element that affects comfort. Lilt has those elements perfectly orchestrated."

Kim carefully tweaked the chair's lines both for comfort and for overall elegance. Each line follows strict rules. For example, when viewing Lilt from the front, all side contours of the seat shell are laid out to be on the same angle as the four legs. "Every contour line and angle is carefully drawn and orchestrated to really sing the same song," Kim says. He also studied how the chair interacted with each staged render environment. "I wanted a piece that can easily be harmonized in many surroundings as if it was always there," he says. "I believe that's where true elegance comes from." 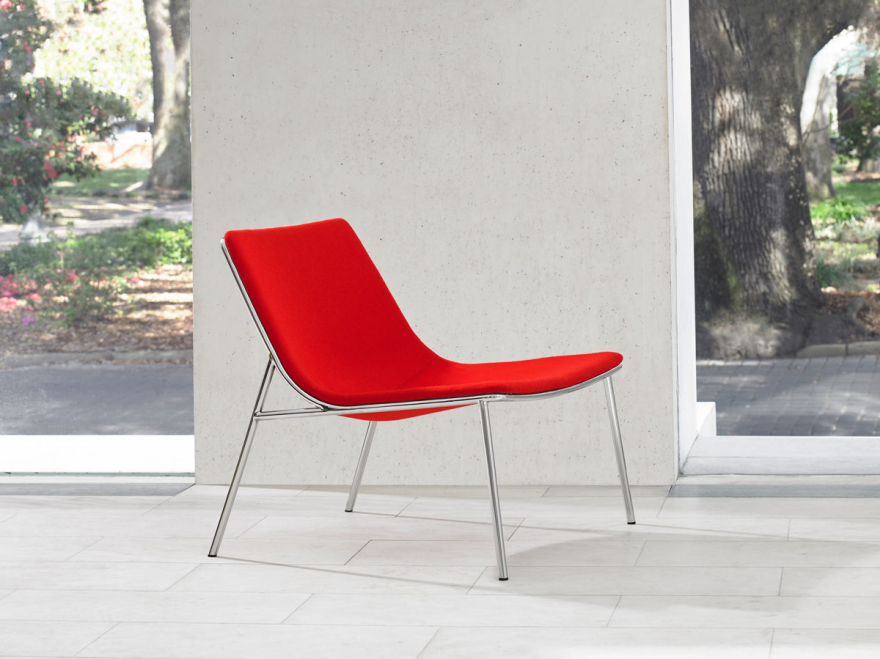 From initial design to final product—a process which spanned roughly five to six months—Kim says that the design remained largely unchanged. "The shape and form were always there from the beginning," he says. "It's just that making calls on proportion, leg angles, leg thickness, seat height, seat curvature and the pitch of the seat took a long process. . . . Among the list of those decisions, if any of them was off, then the chair would've never become what it's like right now." Lilt is now on display in the KE-ZU showroom, and more of Kim's work can be found on his website, brandonkimstudio.com.